“Consenec Impuls”: Will We Have to Wear Our Woolens?

During his talk at the recent Consenec Impuls event in Dättwil, energy expert Samuel Leupold discussed the likelihood of an energy shortage in Switzerland. Probably not this winter, but in the coming years...

This winter, Switzerland – and large parts of Europe – may be dealing with an energy shortage. To cushion the impact, the Swiss Federal Council launched its energy-saving and awareness campaign at the end of August, while also setting a savings target of 15 percent for natural gas as an energy source. According to the most recent government estimates, however, no severe shortfalls in electricity and gas supplies are expected in the coming months.

Former ABB manager on our energy future
In his talk, Samuel Leupold addressed international contexts and considered the longer timeframe – up to 2050, which is also the reference year for Switzerland’s Energy Strategy. Leupold, member of the board of directors at energy company Enel, former CEO of Ørsted Wind Power, and former manager at ABB Power Generation, painted a rather dismal picture of our energy future.
Watch the presentation as a video on Youtube.

Samuel Leupold during his talk in the large auditorium at ABB’s Segelhof campus in Dättwil, on November 15.

Current trends point to trouble ahead
The global hunger for energy is growing unabated and will likely increase by 50 percent by 2050. Although that alone is problematic enough, Leupold also identified three trends that further complicate energy production in Europe. First, as climate change progresses, southern Europe will suffer from more droughts, making hydropower a less reliable source of energy. Then, a large number of nuclear power plants in France are nearing the end of their service life, and it’s not yet clear whether they’ll be replaced. Finally, the cutoff of Russia’s gas supply may well be permanent; supplying liquefied natural gas (LNG) to large parts of Europe is complex and linked with high costs.

The real problems lie in the future
When addressing the current debate on an energy shortage, Leupold said, “In Switzerland, the real problems haven’t even begun.” He explained that, in the long term, any efficiency gains made will be canceled out by population growth. Moreover, the increasing use of heat pumps to replace oil and gas heating systems is driving electricity consumption – and the same applies to the boom in electromobility. Regarding energy generation, he said, Switzerland will have to compensate roughly 23,000 gigawatt hours per year once the country’s three remaining nuclear power plants are phased out. 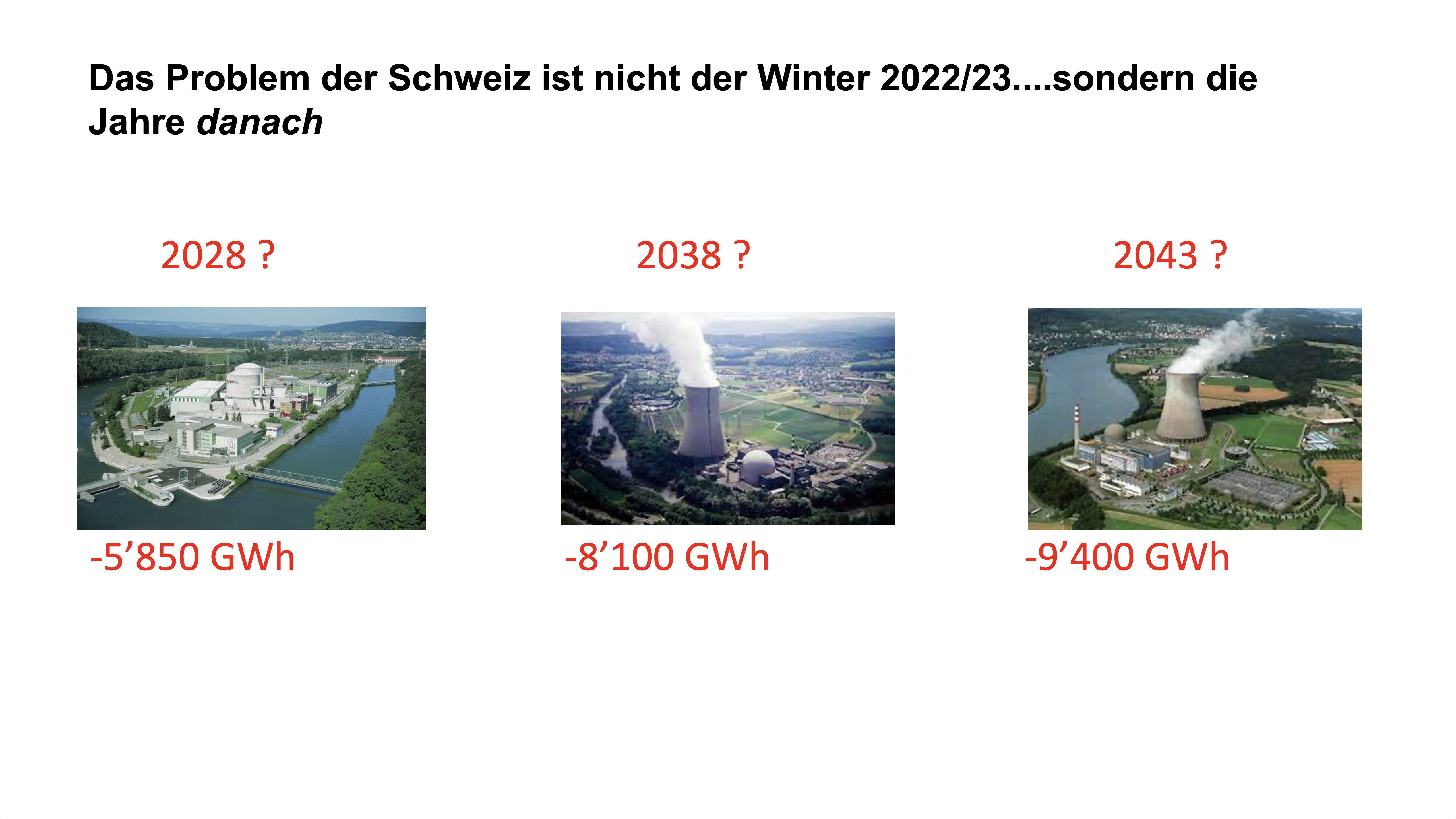 This winter isn’t the problem. The following years are.

A simple fact: winter days are shorter, the sun is lower
“The lack of sunshine will pose a real problem during the winter months,” Leupold explains. As the former head of an offshore wind energy company, however, he sees little potential for wind power in Switzerland. He believes solar energy is the better option, although introducing large-scale photovoltaic (PV) systems has been slow going thus far. And even if PV installations per year were doubled, Switzerland would still be heavily dependent on imported electricity in winter, as the systems generate just slightly over a quarter of their annual energy production during the winter half-year.

The audience listened closely to Leupold’s talk on energy supply.

Neighboring countries face challenges of their own
Switzerland imports energy from its neighbors, who now face challenges in meeting their own energy needs. “And then, where will we get our electricity,” is Leupold’s rather pointed question. Countries like Italy and Austria depend on energy imports in winter, and France is planning on finding alternatives for its nuclear power plants – something that is highly unlikely to happen on the necessary scale. Germany, too, will be confronted with the problem of replacing the base load energy supply it loses after nuclear and coal-fired power plants are phased out.

Storage is problematic
“Yes, of course we could build gas turbine power plants. But where do we find the gas for them? And how do we compensate the CO2 emissions created?” It’s an illusion to think we can store surplus energy from the summer in batteries, and hydrogen storage is inefficient; moreover, potential locations for additional pumped-storage plants are rare – and constructing them is costly.

Controversial proposals
Leuthold closed his entertaining talk with several controversial proposals on how the anticipated winter power shortfalls could be managed. One suggestion is establishing a balance between population growth and available resources – in short, curtailing immigration. Another would be to build two new nuclear power plants as base load suppliers – something that is prohibited in Switzerland’s Energy Strategy 2050. In sum: it will be interesting to see how the debate on Switzerland’s energy future will unfold. 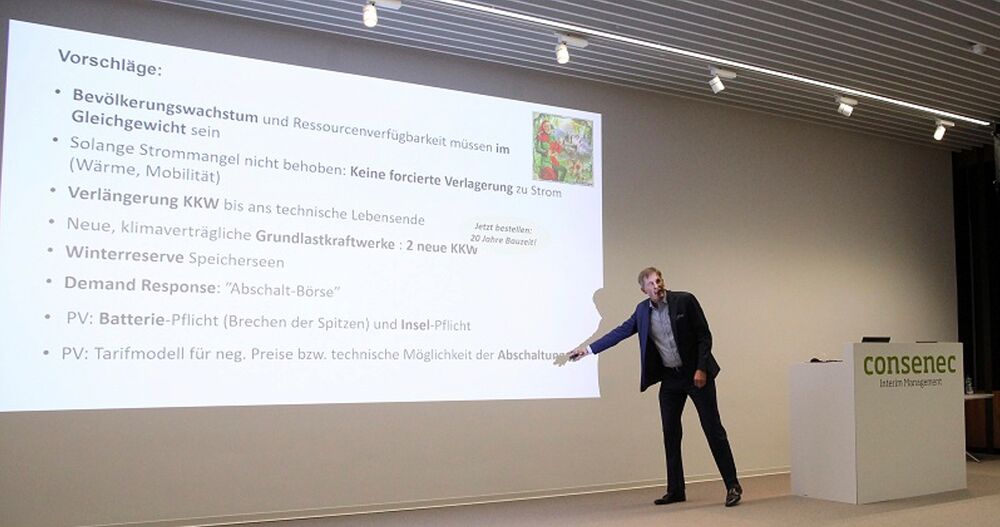 Leuthold presented his proposals in a slightly ironic tone as the medieval trickster “Till Eulenspiegel.”

(52) looks back on a successful career in the energy sector. Today, he sits as an independent member on the board of directors at several global energy firms and serves selected clients as a senior advisor. In addition to his role as Chairman of the Board at Corio – the global develoment platform for Macquarie Group’s offshore wind farms – he is board member at Enel S.p.A and Schlumberger Ltd. Earlier, he served as CEO of Ørsted Wind Power Ltd in Denmark, where he led the company to becoming the world’s largest and most profitable developer of offshore wind power with projects in Europe, North America and Asia. Prior to this, he was executive vice president at Swiss utility BKW, where he was responsible for commodity trading and the powerplant portfolio in Germany and Italy. Over the course of his career, the energy expert has also worked for McKinsey & Company and ABB Power Generation. Samuel Leupold holds an MSc from ETH Zurich and an MBA from INSEAD.